The rain keeps falling. Down. Down.

It has been raining for days and days, and I’m over it. I try to tell myself, “At least it’s not snow,” because it was not that long ago at all when we were shoveling our way out of heaps of snow only to get dumped on with more snow. But it’s been so gloomy. When it is not raining, it looks like rain is looming. Gloomy loominess. So very dreary.

There was a bit of excitement on Tuesday after a particularly bad storm. A great big tree fell in between two houses on our block. The ground was too wet to hold the Silver Maple’s shallow roots, and it toppled over as if it had chosen to surrender before The Rapture took it by the short-roots and hurled it into the universe.

The neighbors all came out to celebrate the tree and the rain respite. 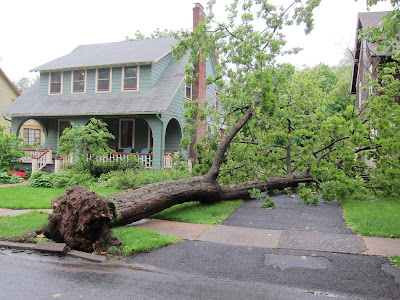 Meanwhile, back in my world having nothing to do with weather or the end of days, I decided to open iMovie on my Mac for the first time. I’ve had this Mac for almost a year, and I’ve chosen to ignore this application. I like learning new things when the things come easily, but I fear those things that do not. Of course, I can’t know what might come easily until I try the new things, but the thought of struggling with that which does not come easily is enough to put me off the things that may come easily should I try them. Is that clear?

This is the first video that I tried to edit. I would have liked to play with it more, but The End of Days is a time-sensitive subject, so I decided to slap this puppy up here and move on to the next video project.

Yesterday, Asher said to me on the way to the bus stop, “Mom, when they come to take away the tree, can you take a video of it? I want to see how they do it.” And I agreed that I would. Except that by the time I got home from taking Levi to school, the trucks had arrived and were filled with tree and were already on the way out.

Today, a new tree stands in place of the old. A tarp covers the roof where the old tree left its mark. And it’s raining again. 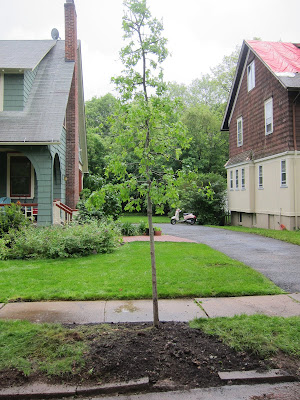 6 thoughts on “A tree surrenders”