Skip to content
My boys care about geography when ice cream sundaes are included in the lesson. Until ice cream became part of the equation, no map or globe or interactive game or puzzle interested them enough to learn about the world. Not even Fifty Nifty United States, a song that has been permanently implanted in my brain since elementary school, could get the toes tapping long enough to peak the curiosity about their own country.
Wait, I had to sing the entire Fifty Nifty United States song just now.
It’s spooky how the slightest suggestion will set me off, and then I can’t stop until I hit Wyoming. It’s as if I’ve been brainwashed just like in The Manchurian Candidate. I’m quite certain now that Angela Lansbury was my music teacher in what must have been Manchuria. I was tricked into believing that I was living in the northern suburbs of Chicago, but what a coincidence that we lived but minutes away from Yu-Lin’s Dumpling House.
Now I know why Mrs. Ottoman, if that was indeed her name, was also so fond of teaching us the traditional Japanese song Sakura in celebration of cherry blossom season.  She was probably old enough to have lived in Manchuria during the Japanese invasion.
It all makes sense now. None of us knew what we were actually saying; a bunch of suburban children singing what we thought was a Japanese song about flowers. For all we knew, we were singing about a Communist plot to overthrow the United States government. Damn you, Mrs. Ottoman with your empire on your mind!

But I shan’t have Mrs. Ottoman foil my efforts to tell you how the boys came to love geography.

Next the world map that we rarely reference in the kitchen, I affixed the map of the fifty nifty United States from fifty original coloneeeee…….
NO!  Don’t do it, Deborah!!  FIGHT IT! 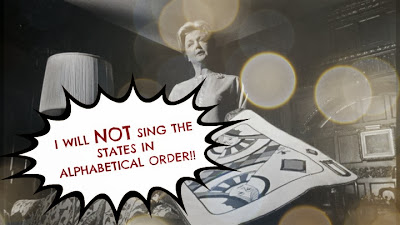 Wait, what? Where am..oh, states, right?  I affixed the map of our country. Now, every time a state passes a marriage equality bill, the boys have to identify the state, color it blue and then dive into a celebratory ice cream sundae. They have never been so excited to talk about equality or the United States.
I believe it was Shakespeare who wrote, “Ice cream doth sweet study make.”
I’d love to tell you that this was my idea, but I actually I have VillageQ contributor Cheryl Dumesnil to thank for setting the example. You’d be wise to subscribe to VillageQ and follow VillageQ on Twitter @villageQtweets for many more wise ideas and hard-hitting news and the occasional mindless fluff await you there.
I digress.
States.  We are all poised and ready with syrup and sprinkles on call for the next state to come around to the inevitable.  And what to do when SCOTUS finally declares equality for all?  Perhaps we’ll take a trip to Le Mars, Iowa, Ice Cream Capital of the World.  The boys will have to be able to identify Iowa on a map, of course.  I just hope we don’t have to wait until they can drive to Iowa before that day comes.

2 thoughts on “Angela Lansbury Brainwashed Me to Sing”