Skip to content
I am the scrooge of autumn, and I say, “Harvest Humbug to you all!”   As I walked into my preschool class this morning, a teacher greeted with a beaming smile as she exhaled crisp, chilled air as if she was trying to share the cold all over my face.  “This is my favorite time of year!” she announced as if an announcement was necessary.  “Can you believe that some people don’t like the fall?”
“Yes. I hate the fall, the end of summer, the season when all things die and the bitter cold.”  She looked at me with the familiar face of horror when I confess to not liking cheese.
“But what about the changing colors of the leaves and apple picking?”
Why do people insist on trying to convince me that I should like something that I don’t like?  Why?
We don’t go apple picking, and I don’t feel the least bit of regret.
My resistance to apple picking STEMS from more than the typical list of reasons.  The list includes:
No, my refusal to schlep the family to a crowded orchard littered with rotting apples to pay exponentially more for apples than I would at the store has to do with a deep-SEEDED memory that haunts me to this day.  When I was a kid, and we would go apple picking every year, my mother would have her way with all those apples-meaning she cooked all the apple things.  And then, when she could not think of one more recipe, she’d carve.  My mother carved faces into apples, let them dry and shrivel into old lady apple heads and then mount them on top of dresses she’d sew herself. 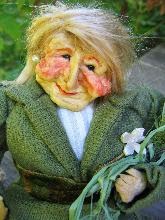 Apple heads.  I cannot forget the apple heads.
Have you ever seen dehydrated apple heads pinned a top of doll’s clothing?  They can only ever be old people because of the wrinkling.  Those apple people lived on our shelves like some sort of tribal shrunken head collection and followed me around the house with their beady eyes, their souls captured underneath painted smiles.

When friends came over, they would behold the little people on display.  Their faces contorted out of alarmed confusion, and I would usher them to another room as quickly as I could.  The question I could never answer because they could never bring themselves to ask was, “Why??”  I don’t know what I would have said.

So do not impose your autumn traditions on me.  I can live without the one day of field labor with my family, thank you.  We’d rather spend the day baking one apple pie with the perfectly formed apples we buy at the grocery store and spend the rest of the afternoon at the movies.  I’d do anything to distract myself from the memory of the freaky apple people.
And for those of you carving apple heads, just stop it.  You have no idea the damage.

7 thoughts on “Apple picking leads to strange and disturbing hobbies”