The house across our street took down their Christmas lights and their life-size plastic manger scene that lit up from the inside. It was sad for the boys who enjoyed looking at the pretty display. Levi was especially mesmerized by the lights but did “not like the people.” Fair enough.

For a month, we’ve looked at their house and adjusted to its regularity. I wondered if I secretly missed the twinkling and glowing and wished that they would decorate their house once more. I wondered if I had made that wish while opening up a Chinese fortune cookie and forgetting to keep my words to myself. I wondered if I was responsible for the “careful what you wish for-Freaky Friday” lesson that was about to learn.

I first saw their lawn sign in the evening lit up by a spotlight in the front yard. A photo of a baby sat next to the copy, “Face it…Abortion KILLS a person!!” And we, the neighbors directly across the street, would have to look at every day – and every spot lit night. 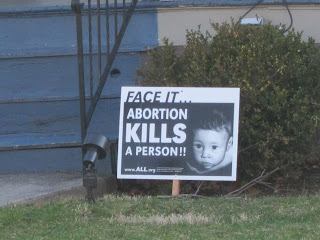 I’m proud of the diversity on our block and how neighborly we all seem to be in spite of ethnic, economic, political and religious differences. I appreciate all the signs that come out during election time that show our support for various candidates and even our positions on certain political issues. I welcome the opportunity to discuss various political issues with the boys prompted by the signs that support ending wars or fight fracking the Delaware or even electing people to office who would not represent our best interests. It’s all fodder for conversation and a great example of how our country stands behind free speech.

But when my 8 year-old asks me what abortion is and why that sign says we shouldn’t kill babies, I am upset. It’s not like I plant signs that read “Two women who perform cunnilingus should have the right to get married!” or “Swearing is fucking good for the soul!” I think we can agree that those signs would not be considered family-friendly. And for a household that most-likely believes itself to represent God-loving family values, I would expect them to put a bit more thought into the kinds of signs they’re putting up on a road filled with small children.

Now, full disclosure, my 8 year-old hasn’t asked yet, but I’m bracing myself for the day that he finally does notice that sign. It has only been a couple of days.

I’d like another fortune cookie so that I could make another wish. I wish people could foster education and use positive messaging when they advertise their issues. Another pro-life neighbor down the road has a bumper sticker on her car that reads, “Feeling depressed after an abortion? Call XXX-XXXX” The numbers probably spell out “You Kill” or “U Murder” or something like that, and it’s likely that any poor soul who calls that number will end up in some sort of windowless room where they’re brainwashed to believe they’ve committed the ultimate sin and then thrown into an active volcano, but the message pretends to be helpful.

Furthermore, her bumper sticker sits on her car where she can offer some sort of guidance wherever she drives. Our neighbors across the street planted their sign on our dead-end road. I hope that the sign was a gift for them because any money they would have spent on that sign would be better spent on a campaign that extended beyond the reach of our block.

I am inspired to respond. I could speak with the couple who lives there, but I hate conflict, and I doubt anyone who sees it fit to put a sign like that up in the first place would be able to see my point of view. I could start a petition to have the sign removed, which may do the trick on our block filled with parents of small children, but it would succeed in further dividing us. I could plant my own signs supporting the right to choose or a sign that reads “Second hand smoke kills babies” so that the lady of the house can read it when she’s able to wheel her oxygen tank outside.

I could make a sizeable donation to Planned Parenthood in their name, but they might consider that aggressive. Planned Parenthood could use the cash since the Susan G Komen charity is cutting ties and hundreds of thousands of dollars in grants (tsk tsk). None of these paths is neighborly. Then again, their sign is not very neighborly either. As a matter of fact, their sign sucks!

I will make a donation to Planned Parenthood, which I wasn’t planning to do (at least for a few months, anyway). I’d love to tell my neighbors that because of them, Planned Parenthood will receive more funding. But I won’t. I will prepare myself for the conversation that I will have with Asher. And maybe I’ll finally hang that rainbow flag outside my door. Wouldn’t want all the visitors we get on our dead-end road to get the wrong idea about the street where we live.

What would you do?