Skip to content
For the past 6 years, we’ve all been avoiding New York City Pride.  We tried to take the boys the first year we were here and realized that a preschooler and a baby and all of their accessories in the oppressive, summer heat of New York surrounded by deafening music and whistle blowing made for cranky children and very disappointed parents.  We’ve opted out every year with a sigh.  But then SCOTUS overturned DOMA and threw Prop 8 out, and I felt that familiar pull, the call of the wild…the wild gays.
I threw it out to the family, but only Levi wanted to join me.  Gabriella and Asher felt proud enough after North Jersey’s Pride Fest.  Levi and I would join friends walking in the parade.
Deborah:  Last chance, Gabriella.  Are you sure you don’t want to come to Pride?
Gabriella:  I know it’s going to be a big one this year, but I really think I’d rather not deal with the heat and the crowds.
Deborah:  As one surgeon said to the other, sutureself.  Asher will be happy to have the option to stay home, too.  Levi and I are going to see how we do.
Gabriella:  Good luck.
Deborah:  Should I wear this?  I don’t want to look like a suburban mom.
Gabriella:  You ARE a suburban mom.
Deborah:  Yes, thank you, but I don’t want to LOOK like a suburban mom.  Even though my FitFlops are probably the most comfortable shoe I have, I’m going to opt for these ordinary flip-flops.
Gabriella:  Uh huh.
Deborah:  I could wear my Lesbian Avengers tank top from the early 90s.  No, right?
Gabriella.  No.  Right.
Deborah: I see you’re not a fan of nostalgic gay-wear.
Gabriella:  Honey, have you ever worn that shirt?
Deborah:  That’s irrelevant.  You’re not being very helpful.  I’m going to wear this blousy, print tank and my jean shorts.
Gabriella:  You’ll fit right in.
Deborah:  I’m painting my toes peacock blue.
Gabriella:  You’ll still look like a suburban mom.
Deborah:  Thanks, Gabriella.
Gabriella: Let me know when you’re on your way home, and we’ll come get you at the train.
And off we went, Levi and I, as suburbanly outfitted as you please but with a skip in our step and a bag of essentials at the ready.  Umbrella, sunblock, snacks, portable iPhone charger, hand sanitizer, water bottle – there’s really only so carefree one can be with a 6-year-old.
It was the best Pride ever thanks to Levi.
Levi was astounded by the millions of spectators lining 5thAvenue who were there to clap, cheer and love each and every one of us.  Then he realized some of those spectators were clapping for him!  Levi waved his rainbow flag, and they cheered.  He gave everyone the thumbs-up, and they cheered louder.  He stopped along the route to give high-fives to anyone who was willing and even outsmarted some of them into trying to give him 5 “down low” only to be left hanging as Levi whipped his hand away and announced coolly, “Too slow.”  With a wink and thumbs up, he had them in the palm of his very fast hand.
After only a few minutes on our route, Levi left his fans to report back to me with a beaming smile, “They really like me!”
“They really do,” I confirmed and added under my breath, “and you should carry this love with you everywhere because not every day is Pride in New York City.” 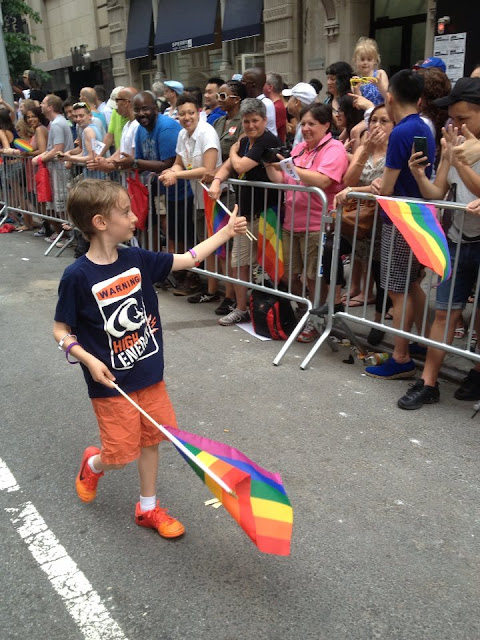 For the entirety of those 2 miles, he entertained the crowd as self-appointed ambassador of gay families.  On the way to the train station he announced to our friends that that was the best day ever.  I couldn’t have been more proud.

14 thoughts on “Couldn’t Have Been More Proud”