In a move sure to be heralded by NPR and FOX alike as “dumb,” Nicole of Ninja Mom Blog and myself give you the 2nd in a four part series: Gay vs. Straight! 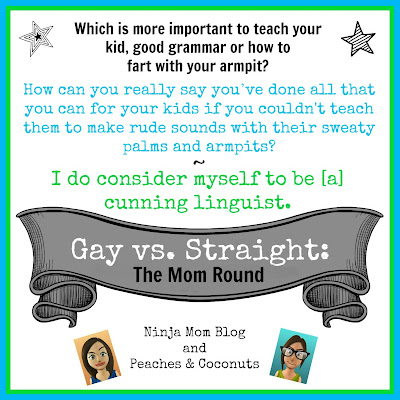 Deborah’s an all-around funny lady, smart-ass and “fake”-married lesbian.
Nicole is a typo artist, goofball and legally-married straight gal.
Over the course of these 4 weeks, we are examining the history of tension between heterosexual and homosexual Americans in settings private and public, political and religious.
Psych! Instead of well-researched debate, we present you with a series of posts in which we anonymously answer probing questions like “Do you prefer massages from men or women?” Forcing you to wonder, which response is from the hetero chick, and which is from the homo lady.  Nicole will post 3 questions and answers, and I will post 3 additional questions and answers – meaning you have to check out each of our weekly posts to play.
Do we hope to change public perception of the imagined differences between people of opposing sexual natures, thereby winning ourselves a Nobel Peace Prize in blogging?  Do bees buzz?  Do birds sing?  Do these jeans make my butt look big?
From here on out we will go by the gender-free-for-all names: Chris and Pat. Good luck pinning the gayness on the metaphorical donkey. We’ll reveal each answer’s author in our final installment.
Gay Vs. Straight:  The Mommy Round


Chris
I present as Carol Brady because my wardrobe is about as old as hers and also because I am alarmingly wholesome around my kids.  My true TV Mom persona, however, is Peggy Bundy.  I have perfected the art of ignoring my children, and Peggy and I also have very needy libidos.

Pat
I’m the just-as-filthy, but much nicer version of Roseanne. I am kinder, smaller and less hostile. But I’m also not above making inappropriate jokes with or about my kids. Let’s hope they thank me later. 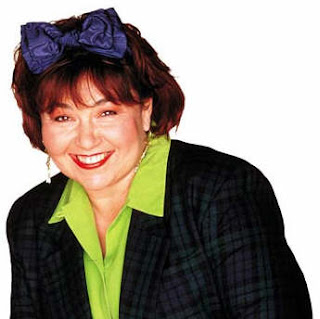 2.  How do you feel about getting your newborn baby’s ears pierced? What about the baby’s navel?

Chris
My mother always told me that the only people who pierce their babies’ ears are Ubangis, and I was not allowed to engage in such a primitive ritual.  Needless to say, as soon as I moved out of my house, I punched 8 holes in one ear, top to bottom. I let all but the bottom hole close eventually because of one unfortunate incident involving a slamming door, a deadbolt lock and the top most earring in my ear.
While I most definitely know that piercing newborn ears is a widely accepted practice, I’m a believer in keeping something in your back pocket for bribery and punishment purposes.  “Keep sassing me with that mouth, Felicia, and I will not take you to the mall to get your ears pierced and beaded cornrows in your hair.”
I had never considered navel piercings for newborns, but I do like the idea of outfitting them with a hoop ring that you could use to hang them from a hook while you went to the bathroom or did some laundry.
I
Pat
It’s like this. At some point my parents told me I couldn’t get my ears pierced until I was 12. At that time I presumed they’d made a careful decision. I imagined they spoke with the professionals at the Piercing Pagoda in the mall; had a 4-way phone conference with a pediatrician and the mother of my friend with not one, but two sets of earring holes; and reviewed the finer points of the five-page plea I crafted for them at the ripe age of not 12. Based on all the hard work that went into their informed choice, I planned to impose the same rules. Until my mom told me that she didn’t remember why they told me to wait until I was 12. I guess it just seemed reasonable or they didn’t have the scratch for ear piercing the week I asked. Parents, can’t trust them.
PS—I say pierce that navel in utero if you can swing it. A girl’s gotta look good in her toddler bikini.
3.  Your afterbirth can best be described as:
A.  LA…LA…LA…LA!!  I CAN’T HEAR YOU!
B.  Buried in the backyard next to our cat, Mr. Whiskers.
C.  Served piquant with a bit of mole sauce.
Chris
All’s I know is that after 34 hours of labor and 3 hours of pushing through the searing burn of my lady parts, I finally birthed a baby, and the midwife told me I had to push all over again to squeeze out the placenta.  No one told me there would be MORE pushing!  “It won’t be hard,” she said.  “And maybe my fist won’t be hard when I punch you in the throat,” I thought.  But instead I whimpered, pushed, took a look at the sea creature that had been growing in my uterus and told the midwife I didn’t care what the EFF she did with it.  For all I know, she brought it home and ate it for dinner.  Talk about take out…
Pat
The truth is that I didn’t want a thing to do with the fluids, tissues, and DNA samples they collected before birth. I certainly didn’t want to keep and memorialize a bloody pancake afterward.* There’s enough rejected and ejected body fluids to make do with when you take that first trip to the bathroom after giving birth, and every diaper change and baby feeding thereafter.
*I have no idea what a placenta looks like, and I’ll not be Googling to find out, thanks.
*                *                *               *               *                *                *

The battle of wits continues, sayeth the Man in Black to Vizzini.  Have you studied enough of your own kind and the kind of others to be able to accurately identify who said what?  Luckily, for all of us, death is not on the line.  Pride, honor and bragging rights, however, are indeed for the taking.  Did Chris and Pat fulfill your every notion of hetero and homo thinking, or did their answers cause you to question your own sexuality?  It happens.  Keep a running tally, and all will be revealed after our last post in the series.  Then you will learn how well your Gaydars and Straightscopes are working.

Don’t forget to check out the 3 other questions on Ninja Mom Blog!

No fair guessing who’s who if you have inside information!  Cheaters never prosper. NEVER.

Did you miss the first round?  Check out Gay Vs. Straight:  The Lady Round

6 thoughts on “Gay Vs. Straight: The Mommy Round”