My neighbor, Jenny, moved to another country last week. It was probably something I said. Actually, she and her family relocated to be closer to family and further away from exorbitant health care costs and property taxes. I’d envy her if her final destination weren’t Finland. I don’t have anything against Finland per se, but I’m partial to a warmer climate, and I’m not a huge fan of poached salmon.

Jenny hosted a yard sale to get rid of everything before her move. “I’ll bring over some baby items,” I said. “They’re taking up space, and I really need to unload some of them.” I said the words as if I were telling her that I had to floss my teeth. In actuality, getting rid of the baby stuff stung. 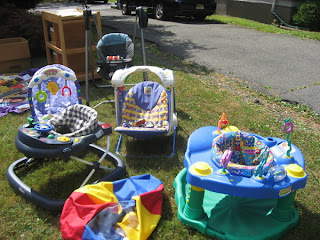 We have two boys, but I always imagined we would have three children. We bought our house and our mini-van specifically because there would be enough room for the expected five of us. The attic is filled to the rafters with all the equipment and clothing we saved in preparation for the next baby. I was prepared to suffer through the long, dark days of infancy one last time to create the big family we were supposed to have.

Well-meaning friends asked how I could possibly consider another child. “Well, we’ve got to hedge our bets. The more children we have, the more likely one of them will like us,” I said. On paper, the idea was madness financially, but I just didn’t feel finished in the same way some other mommies did after they had their last. “Sometimes, I feel like two are not enough and three are too many,” I told my friend with one toddler and twins on the way. “That’s how I feel about martinis,” she answered. I wish having a baby were as simple as ordering a martini. “Stirred, not shaken, please.”

It’s not to say that I wasn’t tempted by the freedom that waited for us on the other side of the baby tunnel. Both boys were now toilet trained and could buckle their own seat belts. The little one was only two more years away from full-day kindergarten. Yet, I couldn’t shake the feeling that someone was missing.

The economy put the kibosh on our plans. Unemployment forced us to look at the realities of three in a completely different way. The time and money required to get pregnant in the first place was enough to consider selling an organ or two. A year passed, and our window closed.

I will confess to you now that if I could engineer a happy accident, I would. I’d pop open a bottle of wine during a romantic dinner at home, and we’d get a little sloppy and a lot careless. But the reality of a same-sex couple is that there are no happy accidents. No amount of wishful thinking or candle light or alcohol can lead to a baby even at the height of fertility. I think back on all the conversations about birth control with my straight friends. “You’re so lucky, Deborah,” they’d tell me. “You don’t have to worry about the expense and hassle of birth control.” “True,” I replied, “but I don’t have sperm on tap.”

At the end of Jenny’s yard sale, most of my contributions stood untouched in the front yard. As soon as I carried the last ride on toy back into my basement, I called Harmony House and scheduled a pick up. Everything had to go before I could convince myself that bad business was a sign that I should again procreate.

A woman from Harmony House arrived with three young helpers from the daycare. The ten year old boys loaded the van in the scorching heat, and I offered them all drinks in my air-conditioned kitchen. “Is this a mansion?” asked one of the boys. Trust me when I tell you that my house is definitely not a mansion. It’s barely standing and hasn’t been painted since Jesus walked the earth.

I watched the boys take in every appliance and every fixture, and we chatted about the goldfish that we inherited from Jenny. “I had goldfish once, but my stepfather poisoned them. He hates me. You have a nice house,” said one of my guests. “Thank you,” I whispered refilling their glasses.

I escorted them to the front door and thanked them for their help. Each of them gave me the warmest full-body hugs I’ve ever had the pleasure of receiving. As soon as they drove away, I got in the car to pick up my younger son, Levi, from camp and cried body-jerking, uncontrollable sobs. I cried because my baby furniture was gone and the baby-making shop was officially closed. I cried because my second son was now my baby. I cried because I felt so lucky to have created my beautiful family of four and so fortunate for all that we have. Perhaps the visit from Harmony House was exactly the kind of happy accident I needed.

(reprinted from my column on Patch.com)