‘Tis the time of year when the crocuses are blooming and robins make their first appearances of the season. It’s not necessarily time to store the winter clothes just yet, but we’ve tasted spring, and mmmm child (pron. chahyl), it tastes good!

All around the globe, people are celebrating the denouement of winter. The Chinese host their Spring Festival at the end of January. In Poland, people prepare for the return of the storks and attach wagon wheels on their roofs where the storks can build their nests. The Hindu Spring celebration, Holi, is a colorful nod to spring during which people parade down avenues and chuck colored powder (or powder of color) at each other until the streets are rivers of personified, Technicolor pixels. What an amazing homage to the rainbow flag it would be if we could do the same during the Pride March. 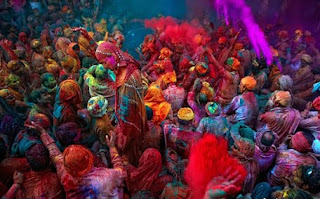 Spring is a festive time, indeed. And it’s also a time of reverence for all that is miraculous about the cycles of the seasons and the reJEWvination* of nature.

No one does springtime reverence, however, as significantly as the Japanese – particularly the people of Komaki when they celebrate Japanese penis festival. For real.

Japanese penis day comes once a year (insert rim shot) on March 15th. A parade of locals schlep an enormous two and a half meter wooden shvonz around town, and everyone carries objects that resemble the male member. You’ve heard of tchotchkes? They’ve got cock-chkes.

The history is long and girthy having to do with the worship of kami, a local deity who was once a feudal lord’s daughter widowed by her warrior husband. Her father-in-law built up the area where they lived, and got more than just a street named after him. He got a Shinto shrine where his house used to be and divine immortality for his daughter-in-law. Not too shabby.

During the phallus festival, townspeople and visitors carry an array of penis shaped items from kami’s shrine to another building that sits just a dildo’s throw away adorned with all-things-penis. Locals would take issue with the implication that they are willy-worshipping. Apparently the sacred day is all about nature and renewal and regeneration, but it all comes down to the schlong.

On the same day in another village, Vag-Day is alive and well at the Ogata Jinja shrine. Their reliance on agriculture generates a reverence of lady bits and the obvious connection to fertility.

Unsurprisingly, March Muff Madness just doesn’t get the play that Dong Day does even though the growing and birthing is all about the vagina and everything she’s got going up there. I suppose representations of labial loveliness just can’t compete with this: 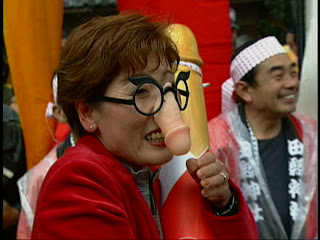 On this day of Genital Exhaltation, may your penises be erect and your vaginas moist with creative juices!