Skip to content
I went running this morning.  I hate running.  There were two motivational factors that inspired me to unearth my old running shorts –like Y1K old.  They are so tight – how tight are they?  And no, I’m not going to insert a Catholic schoolgirl joke here.  They are so tight that as soon as I put them on, the force of the waistband pushing into my bladder had me running to the bathroom to relieve myself.  They are so tight that I knew they’d ride all the way up my crotch in a matter of minutes to display the most stupendous camel toe my fair town has ever seen.
Why did I choose to go running if I despise running and if doing so would most likely result in a monstrous yeast infection?  If you guessed that I was being chased by a wild boar, you are imaginative but incorrect. While I would agree that that would, in fact, do the trick, the chances are slight that I would find myself in the path of a wild boar, and though some people I know are wildly boar-ing, I would probably not run away from them at the risk of seeming rude.
2 reasons to take up a loathsome sport.
1.  Financial.  The truth is, I hate spending money on gyms or exercise classes more than I hate running.  Running is free of charge, and I don’t feel like I’ve flushed money down the old crapper if I don’t go for a run.  Furthermore, I need not purchase any additional accessories like yoga mats or free weights as long as I can find a way into my too-many-sizes-ago work out clothes.  We are also spending a heart-palpitating amount of money to send both of our kids to a day camp whose name is Most Expensive Camp In All The Land Camp…or something.  Some people are house poor.  We’re camp poor.   Why we chose to financially strangle ourselves at MECIATLC is another blog post about the specific needs of our kids and too much of a tangent to address.  Suffice it to say, we opted in to this particular burden, and I have absolutely no cash to shell out for yoga or the bar method or whatever else my suburbanite friends are doing to keep from personifying the infinite expansion of the universe as I have.
2.  People.  I don’t like taking classes with people I know for the same reason I don’t like playing Words with Friends.  I suffer from a profoundly disproportionate ratio of competitiveness to skill, meaning that I want to be the best, but I suck.  So, I don’t spin with my neighbor, and I don’t play Words with Friends. When it comes to exercise, I need to suck myself.  You know, on my own.
So how did my first pass at running go?  Well, I did not appreciate the gasping for air, the bouts of nausea and the unfulfilled urge to spit out the viscous globule of phlegm in the back of my mouth.  I kid you not when I tell you that I experienced all those things from my house to the end of my block…the end of my block being 4 houses away.  There are some steep inclines in my hood, yo.
After I hit a level patch, I felt less ill and found my stride to some Pitbull.    There was enough shade along my chosen route to keep me from deep-frying in my own sweat, but that same shade protected all sorts of bugs from the sun, too.  There was one gnat that followed me for at least 10 minutes flying directly into my face over and over again.  I tried to convince myself that I was getting an upper body workout from all the swatting but it didn’t prevent me from whimpering occasionally.
Eventually, I made my way up and around and down and through town and though I was clearly going to be hyperventilating for hours after this torturous run, I felt good … until I got about 2 blocks away from home.  That’s when I realized I shouldn’t have had that green tea before I left.  The combination of the diuretic beverage and the 45 minutes of bowel jostling left me in a dire-etic need for a bathroom.  I spent the last excruciating 5 minutes of my run doing anal-kegels and chanting, “almost home.  just hang on.  almost home.”
You know, I wasn’t going to put it out there, this running initiative.  I didn’t want to face the, “So how’s the running going?” Or the thoughts that go unsaid like, “Wow, she’s running and she still looks like that?”  And the truth is I might not keep this up.  I just don’t know that running is my thing.  My knees hurt.  Must be that old war injury…   I just find running to be a bit like hell.  Hell is for children, Pat Benetar?  No.  Hell is for runners who hate running. Heaven, however, is watching Lolo Jones run. 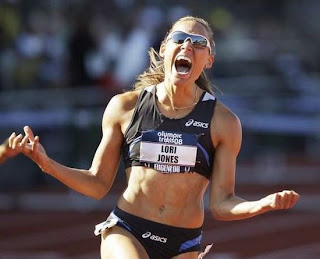