Skip to content
I opened our change drawer in the car to grab a quarter for parking, but the quarters were gone.  I considered only briefly that we had a full stash of quarters in there only yesterday.  I thought maybe Gabriella was caught without cash and dipped into our quarter reserve for a Starbucks fix.  I scraped around my bag and found enough for 30 minutes of parking.
The next time I opened up the change drawer expecting to find the quarters that I had restocked, it was empty again.  This time I knew something was fishy.  Long gone were the days of spending all our accrued quarters on laundry.  Could it be that Gabriella was shacking up at pay-by-the-hour motels and feeding the vibrating bed meter with some whore on her way to Whole Foods? 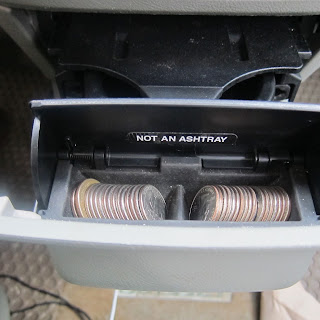 I called Gabriella who was at work.
Deborah:  Did you take all the quarters out of the car?
Gabriella:  Are they gone again?
D:  Yes.
G:  You have to remember to lock the car at night, Deborah.
D:  What?
G:  Always remember to lock the car when you get home.
D:  Someone’s taking the quarters out of our car?!?  They’re in our car…in our driveway…right next to our house??
G:  Just lock the car.
How stupid I was not to have realized the obvious.  I turned around in my seat and scanned the crime scene.  There was a local newspaper folded over in the third seat.  The News Record.  We don’t read The News Record.   There didn’t seem to be any other sign of our visitor.  There was nothing animal, vegetable or mineral left behind other than the newspaper.  I don’t want to tell you what I imagined might have been deposited in the car along with the reading material.  Needless to say, the visual made me throw up a little in my mouth.  I restocked the change compartment, took the paper and locked the car.
As luck would have it, that particular News Record was chock full of interesting reading.  For one thing, I had written a small blurb about the SOMA Pride Fest that was published that day.  It was a straightforward article less than 500 words and not exactly worthy of scrapbooking – mostly because I do not scrapbook.  How kind of our thief to have left the memento for me.
The phone rang, and it was a friend of mine gasping for air and choking on her words.
Deborah, do you get the News Record?!?
No, but I happen to have it today.  Funny story…
Turn to the Police Blotter!!  Read the first entry!
There it was.  Our neighbors across the street reported to the police that their anti-abortion sign had been stolen off of their property.  Remember this one? 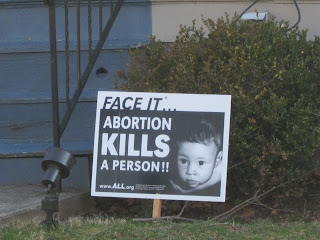 My friend knew how distressing it was for me to stare at that sign every day.  She was horrified on my behalf and couldn’t wait to tell me the news.
It was true that I had noticed the sign was gone a few days ago, but I figured they were making room for a new sign for the upcoming elections – something about Obama being the antichrist or Mitt Romney saving the world from commie, pinko queers or something equally as intelligent.  I did not consider foul play (though I admit I had wished for it), and I was absolutely sure that there the empty spot would not remain empty for long.
For all of you suspicious types, my alibi is airtight as we were hosting a small dinner party the evening the theft allegedly took place.  And while we will all attest to each other’s innocence, it’s worth mentioning that my anxious, risk-averse nature prohibits me from taking the law into my own hands.
I’ve often shared how diverse we are as a block population in color, economic status, religious beliefs, politics, nationalities and family make-ups.  While I’m mostly very proud of our little paved version of It’s a Small World, I do have to accept the good with the bad.
When our neighbors across the street sunk an anti-abortion sign into their front lawn, they sunk a stake in my heart.   I knew they were anti-choice and anti-just about everything else I supported, but we all respected each other enough to act neighborly.  I believed that our neighbors were good people underneath their misguided politics.  But that sign.  It was just so hostile.  That sign did not fit in with the positive messaging posted elsewhere on our block. 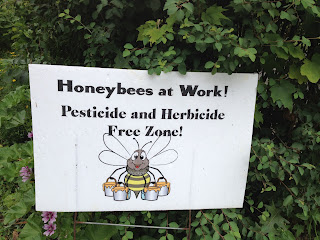 I wrote a letter to my neighbors I never delivered because I knew that people who happily let their young grandchildren run around their house and all around their yard would disagree that the sign was inappropriate for kids.  I called the town in search of ordinances that might prohibit family un-friendly signs hoping they would take action in my stead.  I called three times before anyone ever followed up to tell me that it was a tricky situation what with free speech and all.  I gave up and resigned myself to the fact that the best way to respond was not to respond at all, though it never stopped me from muttering unladylike commentary under my breath when I drove by their house.
There’s a new sign there now. 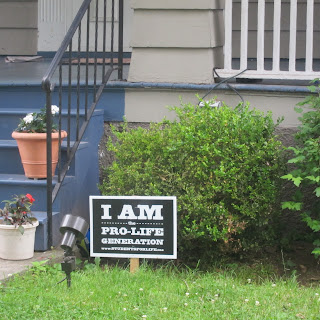 I can barely read it from across the street. 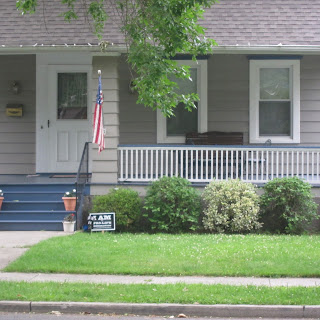 Its pro-life message neatly stands in the way of bushes.  Hmm.  There is no picture of a baby or word of abortion.  I don’t mind it so much.
We continue to nod and smile and wave to each other in passing trying hard, I’m sure on both sides of the street, to observe some sort of neighborly love.  No block is perfect, I remind myself.  I love most everything else about our neighborhood, and I do still appreciate our unique collection of peoples here on this dead-end road.  Even the quarter bandits are considerate – not making a mess and leaving behind periodicals.  Even though I now lock my car every night, I stand by my block where true diversity lives and we all learn to live with it.  I can honestly say my nest is best. 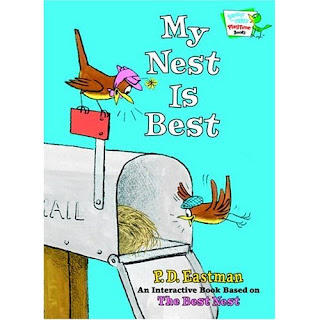 6 thoughts on “Living with diversity”