When I was in school, my mother packed me a lunch every day. I preferred tunafish sandwiches to anything else. I had a taste for fish from an early age… My mother used to write me notes that simply said I LOVE YOU in thick, blue marker. Ain’t that sweet? Yeah, except that on more than one occasion, she placed said note INSIDE my tunafish sandwich. I would not know that she had hidden her love note in my sandwich until I took that first bite and began chewing the distasteful combination of bread, tuna and soggy paper. Horrified, I’d peel back the bread to reveal her handy work; a note with a smiley face doodled in the corner and the blue disaster of tunafish that had absorbed much of the marker ink. I’d beg her not to defile my tuna sandwiches like that ever again, and she seemed to comply – until the next time.

I remembered those days when I started scribing my own note to Asher this morning. He has become more and more selective about the food that he will eat, and my choices are even more limited when I have to pack the lunch for camp. He does not care to fiddle with difficult containers or deal with food that is too messy. He will not eat food that isn’t the proper temperature like a tepid grilled cheese sandwich. I can not pack anything made with nuts for fear of someone going into anaphylactic shock. We used to do very well with hummus sandwiches. Lately, however, they have been coming home missing only one or two bites. I just didn’t want to give up on the hummus sandwich. So easy to prepare and quite nutritious.

After I bagged the sandwich, I taped a post-it note to the outside of it that read, Asher, eat me! I considered only for a moment that a counselor monitoring the children during lunch might think the message inappropriate but only if they had a mind as filthy as mine. In the corner of the paper, I scribbled the Goldstein signature smiley face just as my mother had done for me. I would not now nor ever put the note inside of his sandwich-especially a hummus sandwich. Ew. He ate half of his sandwich. I considered that to be a success.

When I picked him up from camp, I asked him if he ate his lunch. I fired question after question at him until he finally remembered that there had been a note at all. He did not appreciate the whimsy, and he was too young to understand the Alice in Wonderland reference. I had no choice but to call my sister Rachel to bond over our childhood.

Deborah: Remember when Mom put the notes in our sandwiches?

D: I was just telling the boys that story and Levi insisted that I repeat it a few times.

R: It IS funny. Like when she sent me letters while I was at summer camp, and she would include locks of her own hair.

D: Was there a note explaining why she would include her own hair?

R: Nope. Just the standard letter. I love you. Don’t forget to floss. That kind of thing.

Every now and then I worry that I am or will surely become as loopy as my mother. Conversations with my sister always put things into perspective, and I know that I would never send locks of my own hair to my kids or anyone else for that matter. I may be a bit queer, but I think this kid is all right. 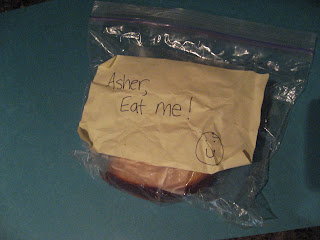