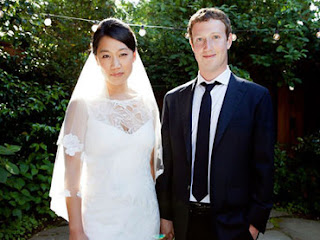 Had I been sitting with my mother when the news first hit that Mark Zuckerberg and Priscilla Chan had wed, she would have immediately exhaled a disgusted sigh and lamented the state of the Jewish people.  It was the same when Steven Spielberg married Kate Capshaw.  “At least his first wife was Jewish,” she said desperately trying to find the loophole that would allow her to still worship the man who brought our people Schindler’s List.   It didn’t matter that Kate converted to Judaism.  Converts weren’t real Jews, my mother said.  Abraham, Sarah and Ruth would have been thrown out of the game according to her rulebook.  I was grateful not to be in her presence that day.

My mother could not bear the thought of intermarriage for a multitude of reasons ranging from understandable to highly questionable.  She feared the demise of our people.  She berated those selfish children who stabbed their parents in the heart.  She wondered what kind of example these famous celebrities were setting for our Jewish youth.  She was sure that every non-Jew was inherently anti-Semitic.
Mostly, I ignored her.  I didn’t enjoy a very positive Jewish experience when I was growing up.  I knew a Judaism that was oppressive, rigid and hateful. By the time I went to college, Judaism and I were not friends. But with a name like Deborah Goldstein, it was difficult to completely negate my Jewish self.
Once out of my childhood house, I met Jews who shared with me their happy memories of ritual and holidays and Jews who found supportive community amongst other Jews.  What I discovered was that our history, culture, traditions and of course our sense of humor connected us all to each other in a very specific way regardless of our concept of God or our degree of religious observation.  I found different flavors of Judaism, and some were quite tasty.
I don’t believe that people are kinder or more charitable or smarter just because they’ve studied Torah.  But when someone from my tribe does something good, I kvell a little bit.  Just the other day, I felt all warm and fuzzy when local ophthalmologist, Dr. Bernard Spier, became one of the first doctors in New Jersey authorized to recommend medical marijuana to patients.  A nice Jewish boy who went to Brandeis!
When I met Gabriella, then a non-practicing Catholic, I made it very clear that I would raise my unborn Jewish children in a Jewish home.  She opted in.  When I think about the partners our boys will find – assuming they will find someone special eventually – I catch myself secretly (and now not so secretly) hoping that they find someone Jewish or at least someone who will want to maintain a Jewish home and raise Jewish children.
It’s not about wanting them to find their own kind or avoid anti-Semitism or fulfill any religious obligation.  It’s a mom-thing.  You know, did I help make memories that were so happy and meaningful that they want to recreate their childhoods in their own homes?  It’s a twisted form of validation, I guess.  Ultimately, I want our sons to be happy and fulfilled in their lives even if Judaism does not factor into the equation.  Of course, they’ll still be expected home for the holidays with whomever they call family.  How could they resist when Gabriella will be cooking?
I don’t care if Mark Zuckerberg believes in God or if he ever sets foot in a synagogue again.  I do hope that Mark is proud of his history and the people who paved the way and provided him with the foundation from which he could excel. I’m certainly proud to claim him as one of our own.
Mazal Tov, Marscilla!