Nothing like a vacation to get my face out of my computer. It’s also a great way to forget the fact that we’re still unemployed. Didja miss me? No need to answer. I’m back with a tale of yesteryear.

When my parents first asked me if I had any interest in going to a sleep-away camp at the age of 10, I could not contain my excitement. The thought of spending weeks far away from home was as close to nirvana as I had ever imagined. I was only 10, after all. It wasn’t that I was deprived or abused as a child, but I always felt stifled in my own home. My mother ran a tight ship where comportment was more important than good grades, and appearances were everything. She often referenced Miss Manners when delivering her daily dose of criticism, and she insisted we use possessive pronouns with gerund phrases before we had any idea what it meant. There was no talking back or use of distasteful language, and we absolutely never passed wind in front of each other. I’m pretty sure my mother has no anus. I really had no idea what to expect from camp. All I knew was that at the very least, it was not home, and at the very best, I might experience full-throttle, uninhibited fun.

I should have known there would be strings attached when the opportunity was presented. I wanted to go to horseback riding camp. I know, how cliché. Now, I’m not saying that if your daughter wants to ride horses she’s bound for carpet crunching, but don’t be surprised if every lesbian you know tells you that she used to ride horses. Why? You figure it out. Stuck? Ok, consider knee-high riding boots, a riding crop and the friction known only from wearing skin tight breeches against a leather saddle set in motion by a cantering horse. Back to the strings.

My mother told me that I could go to horseback riding camp if and only if I first attended Jew Camp (the name of which was not, in fact, Jew Camp). I suspect she thought I might love it so much that I would drop the horseback riding thing in favour of singing Hebrew songs, learning bible stories, eating Kosher food and being surrounded by awkward and very short Jewish boys. How could I possibly imagine a happier camp experience than that? I had to sacrifice an entire summer, but I figured even Jew Camp might be more fun than staying at home. It was a price worth paying.

I don’t remember much about it, to be honest. I survived. It must not have been too awful because somehow I ended up at Jew Camp Reunion that winter. I do remember a couple of things about reunion. I remember that it was bitter cold and the snow was about waist high. It’s possible that I remember because one of the required activities was our half hour walk in the snow after dark in order to experience what it must have been like to hide from the Nazis in the middle of winter. Just in case you haven’t had the opportunity to participate in such an exercise, it’s not fun.

I also remember my nickname that would follow me throughout my camping years. When we first arrived, the counselors decided it would be a good idea to sit in a circle and share our names and what we liked to be called. I thought this an odd exercise when we all knew each other already. I made some wise ass crack about historical figures introducing themselves in the same fashion. “Can you imagine? ‘Hi. My name is Bill Shakespeare, but you can call me Shakey’.” It stuck. I was Shakey. Shakey Goldstein.

The next summer, my parents made good, and I went to horseback riding camp. No Hebrew spoken at Campo Fiesta where the counselors adopted Spanish names and we all celebrated Mexican Christmas. My parents chose to drive me to camp rather than put me on a bus, and I arrived a day earlier than the other campers. My counselors took me to my cabin and let me pick out my bed. I unpacked my duffle bag and checked out the names of my other cabin mates for the next 4 weeks. “Pucci?!? What kind of name is that?” I asked. I grew up in a suburb where the Jews made up 65% of the population. We don’t name our kids one name and call them something entirely unrelated. I was confused. Paco answered, “That’s Pucci. Her real name is Ann Elizabeth, but her family calls her Pucci.” “You can do that?” “Sure. Why? Do you have a nickname?” And that was that. I was Shakey and only Shakey for the 4 summers that I attended Campo Fiesta in Boulder Junction, Wisconsin. Even my uptight mother sent me letters addressed to Senorita Shakey Goldstein. I’ve got to give her points for that one.

When I think about my favourite childhood memories, I think of my days at Campo Fiesta. Shakey was the girl I wanted to be outside of my mother’s house. I was outgoing and silly and even a little confident. I had to be pretty f-ing confident to be smiling so big with a mouth full of braces and a really bad perm. 1982 if you’re wondering. 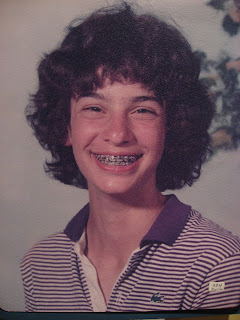 I rode horses and water skied and shot rifles and I made great friends. All those wonderful memories came flooding back this summer when a few old campers organized a reunion. Circumstances as they are, I was unable to attend, but there were enough photos on Facebook to get me all sentimental. There was even a video posted on YouTube of campers singing old camp songs, and I’d be lying if I told you that I didn’t sing along to every single one.

I realize that I run the risk of reviving Shakey after a lifetime of storage. A few friends have already started throwing the name out at me. “What’s shakin’, Shakey?” the campers and counselors used to ask. You may do the same. As ridiculous as the name sounds, I only have the fondest memories of Shakey. Truth be told, I could use a little more Shakey in my life.