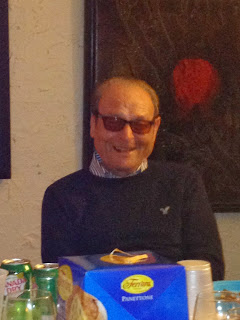 Open the refrigerator door and you’ll find Tetris stacked food containers cataloging our Thanksgiving feast. Other than that, there are no signs of our Great Big Fat Jewish Italian Thanksgivikkah.
The folding tables are back in the basement, our relatives have returned to their homes in Queens and Boston, and all the sheets, towels and tablecloths are laundered, folded and stored. There were 19 at our Thanksgiving table and 6 family members staying with us through Saturday, and now there is only quiet peppered with the nightly blessings over the Chanukah candles. 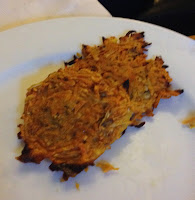 Gabriella grilled two turkeys on the Weber leaving room in the oven to bake spinach pie and sweet potato latkes (a Thanksgiving Chanukah mash up latke).
Family members contributed to the meal with roasted vegetables, a selection of pies and our favorite spirits but even more importantly by schlepping out to New Jersey to celebrate together. 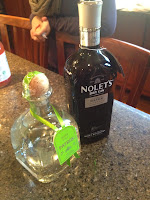 Our most notable guest was Gabriella’s father, Calogero to his friends, Dad to his three daughters, Nonno to his grandchildren and Mr. Di Maggio to everyone else. Mr. Di Maggio had not visited us here in New Jersey since we moved here 7 years ago. He has been having some trouble with the gay thing.
Mr. Di Maggio came to this country from Sicily in his 40s having already formed his unyielding perspectives regarding morality and family. Those old world ideas became clots, blocking the way for easy conversation and obstructing what might have been relationships based on mutual respect. His limited ability to speak in English further congests already clogged communication. Also, he gets mad a lot.
Suffice it to say that though we were always saddened that Mr. Di Maggio could not see his way into our family, we were also somewhat relieved.
Gabriella’s family campaigned for Mr. Di Maggio to get over himself and join us all on Thanksgiving. They urged him not to sit alone while we all broke pane together. After years of staying at home in protest, he gave in and showed up.
All went well generally speaking. Mr. Di Maggio held court and told story after story to anyone who happened to catch his eye. He praised Gabriella’s cooking and spoke gently with our kids. And halfway through the meal, he decided to address his famiglia.
We were all ready. Gabriella was already dabbing her eyes anticipating heartfelt expressions relating to the bond that is family. The in-laws were on the edge of our seats hoping he would not say anything inappropriate or cringe-worthy. What we were not prepared for was the speech of an 83-year-old man who, unlike the rest of us, did not fully appreciate the significance of his presence and who may not have prepared for his moment.
I bring you the Thanksgiving toast that left us wanting more but grateful that there was no more.
My Face Is Her Face, by Mr. Di Maggio. Video attached.

1 thought on “My Face Is Her Face”