The state of the blog is woeful, I know. No need to remind me that I have not been updating often. Many of us bloggers ebb and flow-sometimes for good reason and other times not. Some of us just don’t love you anymore, and we want to withhold and hurt you. Some of us love you too much and choose to spare you the obligation of having to read us constantly. You decide which camp is yours. I will tell you that I have been a busy beaver of late which, whether I love you or not, has prevented a steady stream of blogging.

One of the highlights of last week was attending the opening night of Pee Wee Herman on Broadway thanks to Stage Manager Extraordinaire, Lois. The show was spectacular for a multitude of reasons. There was an electricity in the air that had little to do with the $12 cocktails sold in the lobby. Everyone was visibly thrilled to come out for Pee Wee and relive the catch phrases and the films and the brilliance that is Paul Reubens.

Sadly, when I shared the great news that Gabriella and I would be attending the premiere, more than a few friends could only ask, “Why would you do that?” There was a disparaging reference or two to his past, and I couldn’t help but feel sad. This guy is busting with brilliance, and I was thrilled to experience his talent live. Woe is you, you jaded and jealous sods. And besides, he’s rubber, you’re glue — whatever you say bounces off him and sticks to you! HA HA!! I just realized I used the word “woe” twice already. Woe-well. 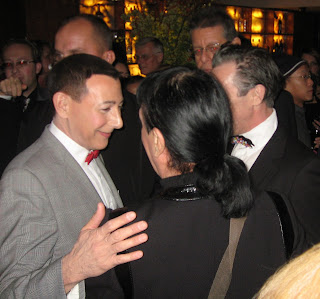 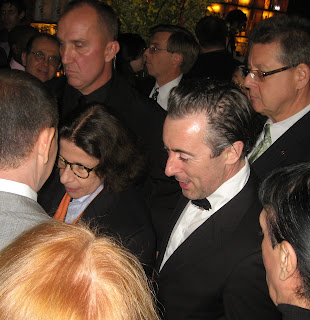 The show was phenomenal. It was nostalgic and fun and visually exciting. We have since introduced the boys to the television series via boxed set of DVDs. They, too, are fans. I see a matinee in their future. I’m going to wish it so. Mecca Lecca Hi Mecca Hiney Ho!

We made our way to the after party after Lovely Lois’s back stage tour. I wasn’t allowed to take pictures of the set, so I am not able to post the photos that I did not take. I can post a photo or two from the party. Much as I wanted to stalk all the celebrities and capture their souls with my camera, I refrained so as not to embarrass our host. 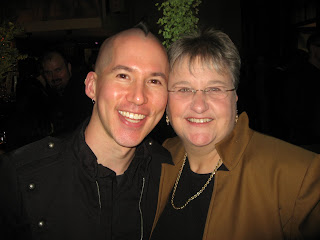 At the buffet, Lois introduced us to 32 year old Alex Timbres who wrote and directed Bloody, Bloody Andrew Jackson, and is the director of The Pee Wee Herman Show. “What did you parents do right?” I asked him. “They raised me in New York City where there is culture.” Alrighty, then. So much for all of my efforts to big-up the burbs.

I did approach one celebrity because I simply could not leave the party without worshipping her to her face. From first sighting at the show to the party, I let her be — too star-struck to know what to say. I’ve humiliated myself at introductions past, and I just couldn’t take the risk that I might make a bad impression on Parker Posey; the Party Girl herself. Parker Posey sat with her boyfriend, Scott Lenhardt, and they were surprisingly on their own.

The next 10 minutes would be the highlight of my evening – sorry Paul. Perhaps if I had had a chance to speak with you, I’d feel differently. Luckily, I did not have to compare highlights, and Parker Posey made my night…week…month…and who knows how long our meeting will remain my precipice.

Now I know that the best thing I can do for my kids is not, in fact, raise them in New York City but to teach them how to read palms. The most valuable skill that I ever learned in college was how to read palms. I’m not sure that reading palms was worth the full tuition amount at a private university, but I have made the most of it. I’m good value at a party. Just saying. I read Parker Posey’s palm, and we chatted for a spell. She introduced us to her man-friend, and I introduced her to Gabriella and our other friends who were able to join us that night.

Thank you, Parker, for being gracious and open and kind and for allowing me to fiddle with your palm and peek into your person. You are a classy lady and a mensch.

“So many great performances. We’ve loved them all,” Gabriella and I confessed. “And, we’ll always have a special place in our hearts for ‘Party Girl‘.”

“It’s all in the writing,” she answered. “But no one is writing anything good anymore.” 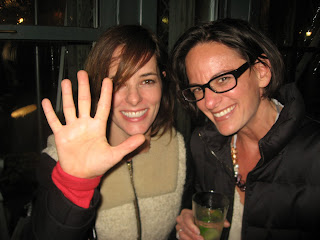 12 thoughts on “Pee Wee and Parker”