Skip to content
When Gabriella’s then-employer told her they wanted her to move back from London to work in the New York office, we started scoping around for a place to call home.  We had no experience being parents in or around New York.  We had no experience being Jewish parents in or around New York, and we had no experience being Jewish, lesbian parents in or around New York.
I was born in New York City.  I went to college in New York City.  But most of my in between years were spent in the Chicago suburbs.  Where to plant our gay, Jewish family in or around New York City was a mystery by the time we made it back, 20 years after leaving there.
When I was at college, the gays were setting up shop in Brooklyn, and over the years it had become fashionable to live in certain sections.  By the time we started our search, Brooklyn had become the next step for Kool Kat Manhattanites who were looking to procreate.   We all know, however, that Kool comes at a high price.  Real estate is outrageously expensive for couples looking for space for their growing families.  Parents fight just as hard to find the right school and get their kids into that right school.  Playgrounds are just as urban as those in Manhattan accessorized in cement and iron and chains.  After 7 years in Leafy London, Brooklyn just felt like Manhattan spill-over, and it just didn’t float our boat as much as we thought it would.
We asked around.  Where do you live and why?  Everyone answered with My nest is best, but when they did the ‘splaining, Lucy, few places seemed to be the right nest for us.  Included in our list of Must Haves: Within an hour’s commute from New York.  A house with a yard.  Good public schools.  No strip malls.  No pioneering – meaning we didn’t want to be the first gay family anyone had ever met. Also, we didn’t want to be too far away from good Chinese food (read we were looking for Jews).  The list of potential towns became a small one, and the answer ultimately became South Orange, New Jersey.
True it’s overrun with mini-van driving moms in Fit-Flops, myself included.  And actually, there’s still no good Chinese food in spite of having 4 synagogues in a town of 17,000.  It’s a shanda.  But we’ve got gays for days.  And now, we have North Jersey Pride, a week of events celebrating the LGBTQ community. 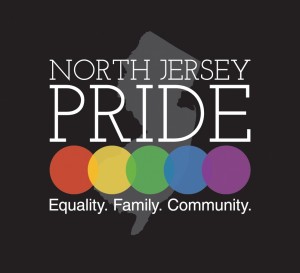 North Jersey Pride started out as a picnic 3 years ago for families who wanted a local, family-friendly alternative to New York City’s occasionally R-rated parade.   This year, we’ve got a full on, weeklong, star-studded extravaganza leading up to Sunday’s Pride Fest hosted by Jessica Kirson, kicking off with a few words from Newark Mayor and U.S. Senate candidate Cory Booker (promptly at 12:15PM).
From Little Sprout to Jolly Green Giant in 3 short years.  Ho, Ho, effing Ho!  I am intensely proud of our Pride and all the participating LGBTQs and Straight Allies who are committed to equality and the well-being of all families.  I want to share it with all of you who may be within traveling distance of our fair town this coming week.  Join us!  Details about the event are posted on the North Jersey Pride website, and here are the highlights:
MONDAY, JUNE 3:  KICK OFF PARTY.  Kick off the Pride Week festivities at Coda Kitchen + Bar, Maplewood Village, 8PM
TUESDAY, JUNE 4:  ANTI-BULLYING PANEL.  ENGAGING FAMILIES:  TURNING BYSTANDERS INTO UPSTANDERS.  Tyler Clementi Foundation, GLSEN and the CHS gay-straight alliance host a community discussion to raise awareness around bullying.  Columbia High School, 7PM
WEDNESDAY, JUNE 5:  LGBT AUTHOR SIGNING.  Tim Federle, Broadway veteran and author of the brilliant new novel Better Nate Than Never.  Words Bookstore, Maplewood, Village, 7PM
THURSDAY, JUNE 6:  FILM SCREENING.  Screening of Gun Hill Road, a Sundance Jury Award finalist.  Director Rashaad Ernesto Green will be at screening for a Q&A following the film.  St. Georges Parish Hall, Maplewood, 8PM.  Tickets $10
FRIDAY, JUNE 7:  STORY SLAM.  Throw your name in the hat and read a 5-minute tale about COMING OUT – coming out gay, lesbian, coffee-hater – anything goes!  Co-sponsored with Studio B.  Burgdorff Center, Maplewood Village, 8PM.  Tickets $10
SATURDAY, JUNE 8:  DANCE FOR EQUALITY.  Dance the night away with DJ Steve Sidewalk and bid on exclusive and outrageously fantabulous items at the silent auction.  The Maplewood Club, 7PM-midnight.  Tickets:  njpride.brownpapertickets.com
SUNDAY, JUNE 9:  NORTH JERSEY PRIDE FESTIVAL, 12-6PM.  Local vendors, equality-minded sponsors, food & drink, KidZone and spectacular entertainment such as:  Antigone Rising, A Great Big World, Chevonne & The Fuzz, Well Strung, The Lavender Light Gospel and MORE!