“I hope I will never meet the intersection of geriatric and sexy,” opened Sandra Bernhard at her Town Hall performance of I Love Being Me, Don’t You? on June 8th. She hasn’t, in fact, met that intersection quite yet – undeniably more sexy than geriatric.

Gabriella and I sat right up front and under her nose in the first row, which was such a treat for us. I have been a fan since her outrageous performance in King of Comedy and her unique combination of biting wit and song in her 1988 show Without You I’m Nothing. And when friends in the Middle West would say to me, “You know who you remind me of?” I was flattered even though they made the connection only because they knew few other foul-mouthed Jews. And then when they said, “But you’re much prettier, of course!” I’d answer, “I think Sandra is rock-star hot, and I thank you for the compliment.”

When I first mentioned that I had bought tickets to this show, a number of people commented that Sandra’s last performances paled in comparison to Without You and that I shouldn’t expect much. I kept hope alive because I love my Sandy. During the first song, I was admittedly worried because Sandra hovered over her music stand and sang from her notes rarely lifting her eyes to meet her public. She sang Across 110th Street well (and I’ve been singing it ever since), but I was distracted by how heavily she relied on her music.

And before she could really get warmed up, she brought out her first guest of the evening. “I’m serving dessert before dinner,” she announced and welcomed legendary diva Liza Minnelli. Liza walked on stage to a deserved standing ovation. Whether Liza had sung a note or not, we all had to acknowledge her supreme talent and place in Hollywood royalty.

Liza and Sandra sang Mama Morton and Velma Kelly’s Class from the musical Chicago. It was a funny little number, and by funny I mean more peculiar than ha-ha. Liza got through the song though she certainly didn’t nail every word. She hung on to Sandra’s waste drawing attention to the fact that Liza is about half Sandra’s height. Mr. Roarke stuck to the script while Tattoo relied on shtick to cover up for the words she forgot. Hey, we all forgave. It was Liza Minnelli for fuck’s sake-more geriatric than sexy but still Liza! It was a memorable duet because Liza is Liza, and we were all grateful to have witnessed her diva-tude firsthand.

The Sandra Bernhard Variety Show continued with two more guests. Justin Vivian Bond of Short Bus fame joined Sandra on stage. They punned and bantered like sassy lovers and then belted out a great number from their musical Arts & Crafts. And, they made a very handsome couple.

In between duets, Sandra delivered comedy bits in her classic sarcastic tone referring to Bristol Palin as a juggernaut and telling us “…when people ask me what they can get me for my birthday, I tell them Fancy Nights by Jessica Simpson.” Her droning tones added that special layer of bite. 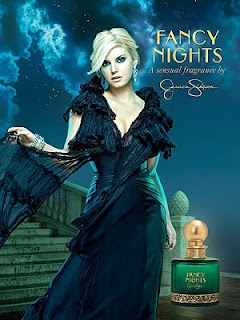 I had just about had enough of the Duets with Sandra portion. I harbored no ill-will towards her guests, but I wanted more of my Sandy. And then out came Rufus Wainright dressed in sear-sucker, whale-printed trousers and an almost-matching-but-not-quite blazer. He looked like he had just rolled out of bed and forgot to change out of his pajamas or comb his hair. But when I tell you that Sandra and Rufus’s duet was sublime, it’s only because I can’t think of a better word to describe how mesmerized I was by their flawless, soulful rendition of Talk to Me of Mendocino written by Rufus’s mother, Kate McGarrigle. I was pleased they chose that piece over Rufus’s father’s famous number, Dead Skunk in the Middle of the Road.

After Rufus, it was all Sandra and her groovy band and back-up singers. There were no more music stands or duets-just smooth operator Sandra delivering herself on a platter, and we ate her up. “I love a person who hangs a dream catcher from the rear view mirror – just in case they fall asleep while driving.”

Sandra is truly at her best when she tells us about her angst-ridden past and escorts us from story to song and back again. Childhood memories, clubbing “back in the day”, comedy, tragedy, we can all see the scenes playing out in front of us while she provides both the narrative and the soundtrack, and it’s always a great ride.

There was one wardrobe change just before the last number. Sandra glided on stage in a long, black fitted dress and her hair in an up-do. But her slow and tormented arrangement of PINK’s Just Like a Pill changed course as her back-up singer helped remove Sandra’s dress to reveal a black, sequenced bodysuit, and Sandra’s wild child took over.

Sandra rocked it like a crazy mo-fo. She must have said to her band and her back up singers, “Let’s go crazy for this last medley of songs! Let’s tear it up and wear them down, damn it! I’m going to run up and down the stage screaming and waving my warms like a krump dancer trying to fly and get all Santeria out there while my black, sequenced unitard rides up my ass crack. You all just try to keep up, dig?”

Did I tell you what a treat it is to sit in the front row? It is a treat mostly-except when you realize you’re operating the camel-cam.

After the show, Sandra greeted her public and signed CDs and DVDs. Of course we waited in line to relish our moments with Sandra. She signed our CD and looked up at Gabriella. “I saw you,” she said to Gabriella whose seat was directly underneath Sandra. In addition to perfect positioning, Gabriella gives great clap.

“I know!” I butted in. “We loved being so close. It was a great show!” I had completely muscled in on Gabriella’s moment. Gabriella assured me later that she didn’t feel trumped, but I must state for the record that it was Gabriella who caught Sandy’s eye. 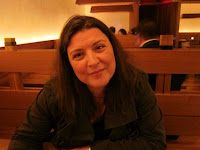 Since Without You I’m Nothing, the world has changed. Sandra and her fans have changed along with it. Little shocks audiences these days. Cursing and references to sex and sex bits are the common language now. Anger is emotion worn so well by the young, and we have outgrown those fashions in exchange for a more practical wardrobe and a kinder view of the world. While her critics may be disappointed by Sandra’s smoother edges, I loved her observations of pop-culture and society–still barbed enough to be cutting without being hateful. Sandra Bernhard worked hard for us that night and delivered with style. Thank you Sandra! I love that you’re being you!! 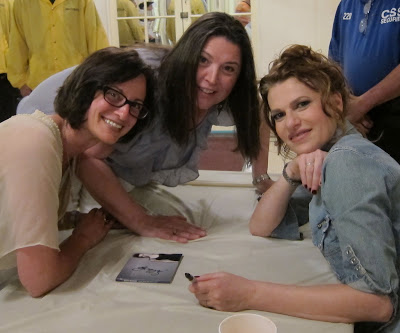