Skip to content
When I was in college, I babysat for bar money.  That actually makes me sound like I was a bar-goer.  I mean I was, but for a young lesbian lady, going to the bars was about more than getting fancified, drinking all night and hooking up.  It wasabout those things, yes, but it was also about being surrounded by lesbians.
You would have thought that I was sufficiently surrounded at my women’s college, spelled wimmin or womben or womyn if you are 19 and naïve enough to believe that taking the men out of women is a revolutionary act that will change the world.  Those were the days when we found power in sewomantics.  There were plenty of girls fiddling with girls at school, to be sure, but there was something so empowering and exciting, tittylating even, about stepping outside the insulated community of collegiate wimhen to rub shoulders with the grown up lesbians of New York City.
Woman, did we rub shoulders all right!  In the 90s, my favored destination was Cubbyhole, which, at the time, was about the same size as most New York City apartments.  For those of you unfamiliar with the size of your average New York City apartment inhabited by 20 somethings and the unminted, it is about the size of a suburban house bedroom where the bathtub may or may not be in the kitchen.  True story.  It was always a tight squeeze at the Cubbyhole, which was a good thing for femayles who were less assertive.  If someone’s breast was about to take a nip-dive into your cunttail, you were likely to strike up a conversation even if the opener was, “Rather than trying to syphon vodka from my glass with your boob, why don’t I buy you a drink?”
The drinking establishment I speak of is now Henrietta Hudson and has expanded so that no one need engage in mammalian mikvahs (or boob baptism for you gentiles) and where everyone needs a new excuse to approach a patron.  Cubbyhole exists as well but in a different location with ample space.
Rather than continue on this herstory of bars, I circle back to my opening – something I enjoy doing when Gabriella works late.  But in terms of the opening of this post, the reason I was talking about babysitting was actually to tell the story of one family in particular who represented more to me than cash for lesbian bar field trips.  There were two small children, a boy and a girl, and their Upper West Side parents, Justine and Jeff, both of whom were and are writers.  Their daughter Grace was a happy, easy baby, and their son was a sweet, round-faced, curly haired smiley toddler named Asher.
Here is present-day Justine and Grace.  Grace is now in college and babysitting but definitely not spending all her money on booze – maybe some, but not all.  Asher is living in California after graduating from college and securing a job as a journalist.
Fast forward, Deborah and Gabriella have a baby boy, and Deborah insists his name be Asher because of all the positive associations and because she mistakenly thought that the name was uncommon.

Over time, the parents and I got to know each other a bit through abbreviated chats before and after their evenings out.  I learned that Justine had written a screenplay, and she offered it to me to read one night.  I devoured it.  The film played out in front of me, and I forgot the sleeping children in the next room.  I hoped that their parents would not come home before I finished it, and I couldn’t wait to see it in the theater.  And that was that, for a while anyway.

When I was 25, I moved out of New York.  We all lost touch, easily done in the days before Facebook.  Her screenplay never made it to film.  It wasn’t until we had our Asher that I managed to find Justine again.  When we finally reunited, Justine showed me a copy of her memoir, adapted from the screenplay I read those many years prior.   It with great pleasure that I recommend her “mostly true memoir,” Scattered by Justine Blau. 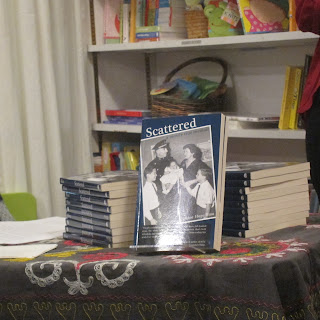 Justine is making the bookstore rounds and invited me to introduce her last week in Montclair, New Jersey at Watchung Booksellers.  Here is part of the introduction I delivered there.

Scattered is the bittersweet story of Justine’s nomadic childhood in the middle of Manhattan.  After 6 years of moving from hotel to apartment to hotel with her mother and 2 older brothers, she was eventually placed in a children’s group home run by the Jewish Child Care Association.  It is the story of a young girl torn between her need to survive and her boundless love and loyalty to her mentally ill mother.

Justine first wrote this story as a screenplay for her master’s thesis at Columbia Film School, where it won the top screenwriting award and got her a fellowship at Paramount Pictures. The screenplay was optioned five times but never made, so Justine adapted it as a memoir. An early draft of the book helped her win a New York Foundation of the Arts fellowship. A chapter of the book was published in the prestigious anthology Rumpus Women, Vol. 1.

Perhaps I’ll see the story on the big screen yet.  Until then, I am happy to promote the book written by Justine Blau; employer, friend and source of inspiration as a writer, a parent and a wacky-mom survivor.