Skip to content
It was a sudden death.  I didn’t see it coming.  I had no warning.  No indication.  I was unable to prepare myself for the loss.  Our microwave died yesterday.  Two days ago, my food was piping hot within minutes, but yesterday the under cabinet GE Profile Spacesaver II rotated my meal but failed to increase its temperature.
I craved that lentil soup Gabriella had prepared a couple of days ago.  She makes a mean soup – and by mean, I mean glorious.  3 minutes should have done it.  Maybe I had pushed 30 seconds instead.  Could time have passed that quickly that 3 minutes should seem like 30 seconds?  I doubted 3 minutes had elapsed, but my soup was cold.  The proof is in the pudding, after all, or the soup as the case may be.  I selected the minutes slowly and deliberately once more giving the keypad my full attention.  After 3 minutes, my soup was not even tepid.  I stared into black, tinted glass looking for signs of life, but there was only emptiness. 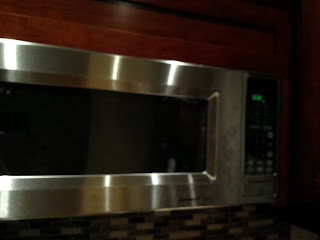 She was just 5 years old.  It was her magnetron.  She went quietly…well, other than the beeps that erroneously signaled a heated meal.  Clearly she was demented in the end.
I have been eating cold food since yesterday though there are so many leftovers that would taste infinitely better if warm.  It is amazing how many things I will eat that do not require reheating in order to avoid using a pot or pan to heat food in the oven or on the stove.  Today’s lunch could have been that delicious lentil soup or pasta with homemade sauce.  Instead, I finished the tuna fish that was left over after I made Levi’s lunch this morning.  I did not want tuna fish, but I was hungry and feeling very, very lazy.
My plan was to run out and get a cheap microwave until we could replace the fancy, compact microwave and get a professional to install it neatly within the space provided.  Gabriella was opposed to purchasing an interim appliance being the more frugal and practical of the two of us.  Then I suggested we give up using the microwave altogether seeing as how microwaves are insidious killers and body manglers.*  Gabriella called my bluff being more old-school than I.  She’s the kind of gal who would rather chop, grind, mix and knead everything by hand.  That peasant girl, from the hills shit is cute until I have to adopt those ways as my own.
I’ve been researching all the benefits of microwaves to justify a replacement.  It’s tough going.  There are plenty of videos of people blowing things up in microwaves, but we don’t have much need for that in our house at the minute.  Nor do we have a need to create soap soufflé.
I should have been using the microwave to sterilize sponges.  Did you know that 2 minutes in the microwave rids your sponge of all bacteria?
I did learn about medical benefits of microwaves.  Apparently, microwaves are used as an alternative to surgery.  In the case of enlarged prostates, for example, doctors can use microwaves to heat up the engorged tissue around the prostate while decreasing the size of the prostate itself.  I’m not exactly sure how they place the shvonz in the microwave and shut the door to achieve this procedure, however.  I guess that’s how come people go to medical school for all those years so’s they can figure out how to do that sort of thing.
I’d like to believe I could do without the microwave. It could sit exactly where it is like a stuffed owl prepared and mounted by an appliance taxidermist.  The clock still works, and I could store things inside using the round, glass dish like a Lazy Susan.  I wish I never knew the glory of the microwave.  I shake my fist at you, Percy Spencer!  That said, I’d be willing to do a microwave product review for any appliance vendors out there.  I can’t just quit cold-turkey – cause I can use the microwave to heat it up!
*Here is a link outlining the horrific dangers of microwaves.  Do NOT select said link if you are not able to unknow facts that make you feel rotten.