We are a half-hour train ride away from NYC, and a significant percentage of the people here either work on Broadway, attend Broadway productions or both. And so it wouldn’t surprise you to learn that we also boast a significant Jewish and/or gay population, would it? It probably also wouldn’t surprise you to learn that there are many other options for theater closer to home than midtown Manhattan serving all us Jews and gays. The Paper Mill Playhouse is a hop, skip and a sashay away from our house and is not your every day community theater. The performers and crew are all professional theater people as opposed to lawyers and computer programmers who always wanted to be on stage but had neither the opportunity nor the talent to get there. Nay, theater at the Paper Mill is the real deal.

Before show time, Gabriella and I attended Paper Mill’s 4th Lavender Night, which is a private cocktail party in the theater’s carriage house for the LGBT ticket holders. Nothing like canapés and conversation with the queers before a show, I say. We had the added benefit of hanging out with famed stager manager, Lois Griffing and some of the delightfully talented cast members.

“Where’s the funny peculiar thing, Deborah? You left us hanging!”

Yes, my pets, I do apologize for carrying on so, but I have now escorted you to the very scene in question. We were all sipping our drinks and mingling and such when we saw 2 men in the courtyard just outside the carriage house. I will dub them with names inspired by musicals in honor of the event. As politically incorrect as they may be, they serve to illustrate without revealing too many identifiable details.

Miss Saigon and Daddy Whore-butts positioned themselves in the center of the courtyard and in front of the expansive windows of the carriage house for all to see and fully aware of their audience. We didn’t take much notice of them until Miss Saigon bent down on one knee and held Daddy Whore-butts’s hand in his.

“Gabriella, take the camera and get a picture!” I squealed. (Lest you think that I take joy in having Gabriella do my bidding, she is, in fact, the better photographer. And also I like her to do my bidding.)

Gabriella trotted outside, and we all watched as she took a couple of shots. I thought she might linger until DWB accepted MS’s proposal, but she came trotting right back inside. “It’s not going so well,” she explained. “Daddy Whore-butts won’t say ‘yes’.”

“He’s not getting any younger,” said a gay. “Neither am I. I need another drink,” said another.

We all watched and waited, but DWB would not agree to wed MS, and MS would not get up off his knee. Minutes passed and then a few more. They continued to talk while MS stayed put on his knee and DWB kept hold of his hand. MS then presented a ring that DWB refused to accept.

“How embarrassing,” said one of the gays. “Maybe they should take it inside,” said another. “Is there a therapist in the house?” I added.

Over the next half-hour, we tired of their slow moving drama and turned our backs on our unrequited lovers. We focused our attention on our drinks and our friends, checking in with DWB and MS only occasionally. Eventually, MS placed his wallet underneath his knee. “Guess, he’s not used to being down there so long,” observed a gay. “No wonder he doesn’t want to marry him,” responded another. 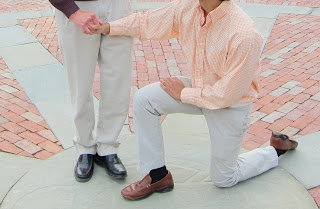 Just as we were finishing our last drops of drink and gathering our bags and jackets, MS stood, and the two embraced for what was literally another 5 minutes. MS returned the ring to his pocket, and they walked into the theater un-engaged. They disappeared during intermission.

I was sad for them at first, but then it occurred to me that this was probably not the first public performance they had staged-and I do mean to call them both out. They seemed awfully comfortable and calm in the center ring for all to see and capture on film. DWB could have taken MS somewhere more private or even walked away in protest, but he stood as long as MS knelt in the center of the open courtyard with an audience of many. So, I’m left feeling cold about the whole affair. Drama for drama’s sake is just not attractive. And frankly I was just not in the mood. Tragedy tomorrow. Comedy tonight!

Good luck gentlemen, wherever you are. But the next time you come to Lavender Night, leave the drama to the professionals.