Gabriella put her foot down and proclaimed that the boys would not live through one more summer without learning how to swim. Perhaps the root of her insistence stems from her own lack of confidence in the water. Gabriella may be off-the-boat, but she stepped off that boat right on to dry land and never looked back. She was only 5 when La Famiglia came over, so she has few memories of the journey. She does have a vivid memory of being tied to the boat as a safety measure while sailing through rough waters. It was all very harrowing for her, and she is forever scarred by the experience. There are no Olivia or Sweet cruises in our future, and my childhood dream of racing with my lover in the America’s Cup – forever dashed. 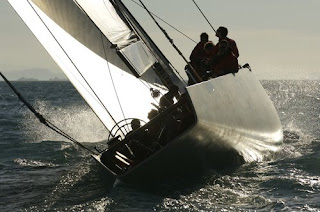 I agreed that lessons were in order. We figured Levi would set the stage for Asher. He maybe the younger of the two, but he’s fearless compared to his risk averse older brother. We were at the beach a few weekends ago with our friends, and while Asher hung out in the sand and baked in the sun, Levi insisted on jumping up and down in the cold, ankle-numbing seas for what felt like hours. We booked an hour for swimming. We had a plan. Levi would start things off to show Asher how much fun it is to swim, and then Asher would reluctantly follow suit so as not to be outdone by his baby brother. As per usual, our children proved to us that we know absolutely nothing.

The instructor, Lisa, was in the pool waiting for Levi. She is a teacher at our pre-school and has also babysat for the boys a few times. Levi knows her well. But, the minute Lisa reached for him, he screamed and cried until his shift had ended. Lisa held on to him and tried her best to comfort him. She spoke to him gently, slowly bobbed up and down and even sang a song or two. She checked in with us to make sure that we sanctioned the trauma. We gave her the nod and tried to praise and encourage while the torture continued. We clapped wildly for our inconsolable child in an effort to drown out his deafening screams.

“NO CLAPPING! NO CLAPPING!!” he commanded through his tears. We were only making things worse. So what did we do? We stuck to our guns. Obviously, if we continued to praise him, he would become so distracted by our boundless love and support that he would stop crying and enjoy the swim.

“GOOD JOB, LEVI!! GOOD JOB!” We yelled loud enough to cut through his cries to which he responded, “NO GOOD JOB! NO GOOD JOB!!”

I had to agree. “Well done” sounds much better than “Good job”. We immediately made the correction. “WELL DONE, LEVI! WELL DONE!” During our life in London, our American accents softened ever so slightly, and we picked up a few phrases here and there. Our loud, wide-mouthed American accents are back in full Glory Glory Hallelujah, but there are words and phrases I refuse to drop because I simply prefer them. At the risk of sounding totally affected, I can’t help but refer to pants as trousers, to garbage as rubbish and to the bathroom as the loo. When I mention that our kids slept late, and we hadn’t been so lucky as to have such a lie-in since we were at university, we are met with blank stares. I could go on, but you get the picture.

Unfortunately, for our boys, we learned all our baby vocabulary in the UK. We don’t say nappies anymore, but Asher and Levi each have a willy, and Asher wees in the toilet. I’ve met one other American woman who refers to her son’s penis as a willy, but she is the same woman who introduced me to her children as Mrs. Goldstein which is wrong on so many levels. Gabriella takes the cake by insisting on pronouncing the ‘h’ in herbs. I’ve let that one go because it sounds totally weird-ass here.

I surrendered to the U.S. date format which drives me round the bend! It doesn’t make any sense whatsoever to lead off with the month followed by the date and then the year. It’s illogical. Date, Month, Year. Is it so difficult to opt in to a system that is used all around the globe…because it makes the most amount of sense? Don’t even get me started on the Metric System. So there are a few generations of people who are confused and frustrated for a bit? Perhaps a check will bounce because the date is incorrect or someone will miss a dentist appointment. I think it’s worth the humps in the road to get to where we need to be.

I’m yanked out of Blighty and back to the swimming pool to hear Levi protesting very loudly. “NO WELL DONE! NO WELL DONE!!” Clearly Levi is not feeling particularly British on this day. We cut his lesson short and hoped Asher would make the best of the remaining time.

Asher loved every single minute. Lisa led Asher up and down the lane in the pool with various floatation devices. Toward the end of the lesson, she let go and had Asher paddle towards her. We watched him laugh nervously as he frantically “swam” back to her arms. I have never seen Asher more proud of himself as I did that morning, and Gabriella and I admitted to each other later that we welled a little bit watching our timid boy surprise himself with his own bravery. 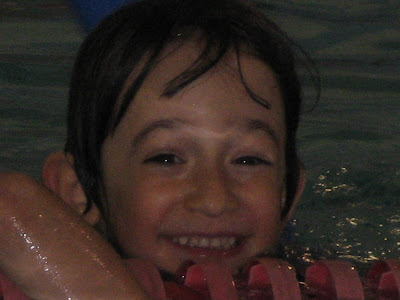 After a few minutes wrapped up in his towel, Levi pulled himself together and watched Asher have the time of his life. When our hour was up, I turned to Levi and delivered the good news. “We’re finished with our swimming lesson now, Levi. We can go home.”

With that, Levi dropped his towel and screamed his loudest, longest scream of the day, “THAAAAAANK YOOOOUUUU LISA!!!!” He may be terrified of the swimming pool, but the kid’s polite. I’ll give you that.

The next week, Asher took the entire lesson. He had been counting the days until Swim Day, and Levi would start screaming at the mere mention of swimming. “NO SWIMMING!! NO LISA!!” We have time. Asher had a great lesson of firsts. He blew bubbles in the water (a minor miracle for the boy who hates water in his face as much as the Wicked Witch of the West) and he jumped into the pool. Levi prefers to be in training for now. He’s observing his brother and building up his upper body strength in preparation for the butterfly stroke. 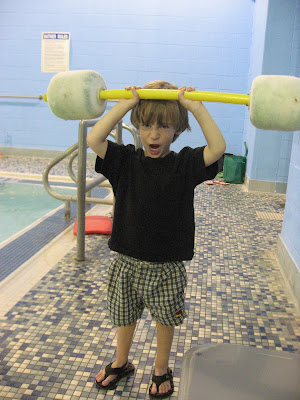 Levi is much happier on land for now. Playing with his big brother provides him ultimate happiness as shown here during a session of pillow-fort. This photo makes me shnort every time I look at it. I hope it brings you a bit of joy, as well. 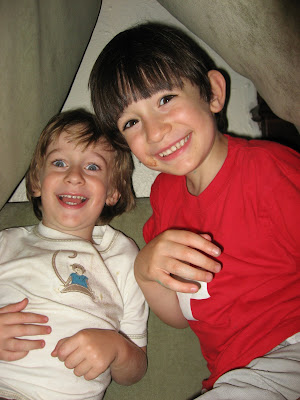