We manned the Gay Table again at Asher’s school’s Diversity Fair 2011. And by we I mean mostly Gabriella because I had gathered all the necessities for the day and because she wasn’t manning the Italy Table this year. And by manning I mean womanning. Personning? Once again, the royal we were sucked into representing gay parents at Asher’s school because the organizer is our friend and a gay parent and we don’t really do much volunteering otherwise. But I’ll be honest. I am conflicted about the need and appropriateness of an LGBTQ table at the Diversity Fair.

The fair is supposed to be a place to educate and celebrate the different colors, religions and backgrounds of the families at our school. Table-manners (and by table manners, I’m not referring to etiquette but to the people manning the tables and by manning I mean see above re: manning) are supposed to provide a craft, a food, giveaways and literature that best represent their country or culture. Last year, I was at the Gay Table while Gabriella sat behind the Italy table. She decorated her table with the Italian flag and images of Italy. She displayed books and handed out pizza and kids could learn Italian words with activity sheets and coloring books. She had it easy.

Throughout the fair, tables showcased the diversity at our school. There were empanadas at the Argentina table and yellow lentils at Ethiopia. There were maps and historical information at Sri Lanka and a multi-media presentation about Spain…at the Spanish table. There were maps at the Turkey table and cheap, toxic, plastic toys at the China Table. Oh wait. We had the cheap, toxic toys from China. Anyway, my point is that it is easy and fun to represent countries of origin at the Diversity Fair.

But where do gays come from? Sometimes I prefer they come from behind, but I didn’t think people would get it if we turned the table around to face the back of the room. I decided not to over think it. I found everything I could with rainbows on it and called it a day. We placed a rainbow sticker on each child’s Diversity Passport, gave out rainbow lollipops and rainbow colored peace-sign necklaces. Everyone spent a few minutes making a scratch magic bookmark with rainbow colors underneath the black coating and getting rainbow colored tattoos. We displayed books like we did last year; And Tango Makes 3, King and King and The Family Book. I had glued photos of gay families on a big, tri-fold display board-many of them recognizable celebrities like Wanda Sykes, Clay Aiken, Sara Gilbert and Cat Cora. The text on the board read “Celebrate Diversity”, but nothing actually read “gay”. 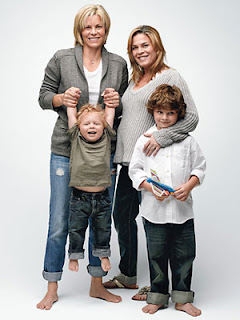 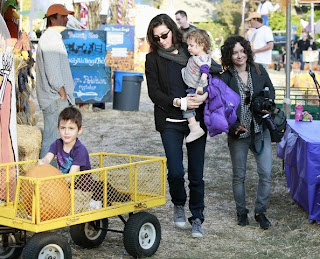 What we didn’t do is say, “Welcome to the gay table, children! Our families are different because our sexual partners are the same gender as we are. Have a lollipop. We love sucking. We gays also really like body art, so we’re starting you off early with these temporary tattoos. If you want a permanent tattoo when you’re older, it’s probably because you’re gay. Lesbians tend to be political activists, and gay men love to accessorize, so here is a peace-sign necklace for you. Don’t forget to make a bookmark because we believe that the more read about inequality in our country, the more likely you’ll be to support equal rights for lesbian, gay, transgendered and queer people. Have a gay day!”

There are those of us gays who would have happily and proudly said to the 6 year olds visiting our table, “This is the gay table, boys and girls because we are gay.” But we’re just not those people. We did tell them that we represented families with 2 moms or 2 dads but then felt like we had to include single parents because some gays are parenting on their own. I doubt any child left the fair understanding exactly what our rainbow-infested table was celebrating.

Our message was unclear and confusing because we only made references to being gay as opposed to naming ourselves out loud–and proud. And because we had a serious PR issue, the school’s newsletter and our local Patch site neglected to show one photo or acknowledge our table at all even though every other table got a mention.

So, what’s the answer? Better messaging? Pass the torch to gay parents who believe it’s appropriate to teach children about gays? Ix-nay on the ay-gays all together? Rebrand the gay table as The Diversity-in-General Table and represent everyone? I don’t know, but I personally won’t be ordering that much crap from the Oriental Trading Company again unless every child walks out of there knowing they got their goodies from gays.

10 thoughts on “Where do gays come from? Diversity Fair Take 2”