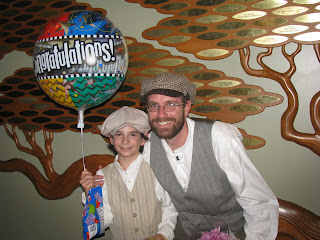 Traditions, traditions. Without our traditions, our lives would be as shaky as… as… as a fiddler on the roof! I’m biddie biddie bumming and yidle diddle dumming right now after a glorious weekend visiting my sister and her family in honour of Rachel’s husband Ron and son Joshua’s debut in Fiddler on the Roof. It was Joshua who auditioned first for their synagogue’s production. He played a village boy who sang and danced in a number of scenes. He looked forlorn singing Anatevka and hopeful during The Sons portion of Tradition. He hoped the matchmaker would find him a pretty wife, and I hoped that the freakishly ginormous monstrosity of a child standing next to him – the same age as Joshua but literally twice as tall and three times as wide – would not eat him before the number ended. He was spared. 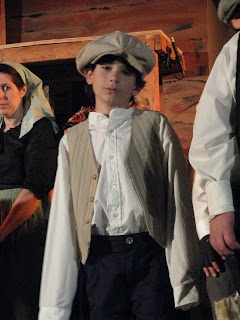 Ron was on schlepping detail taking our young star to and from rehearsals, but the congregation’s rabbi and cast members pursued him hard to jump on board. “I figured I’d be there anyway for all of Joshua’s rehearsals,” Ron explained when he accepted the role of Motel Kamzoil. Uch! We were so proud. My sister! Married to a Jewish tailor! A Catholic man whose parents are single-issue, pro-life voters became a star in a liberal-minded synagogue’s production of a quintessential Jewish musical. That was a miracle! 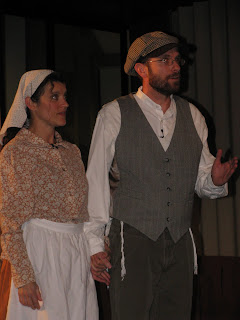 Pride shot out of our every pore while we watched the boys shine on the bimah/stage. Motel ‘s hands locked tight around the arms of his chair as the groomsmen thrust him into the air during the wedding scene, and I couldn’t help but laugh because this wedding was far more Jewish in a traditional sense than Ron and Rachel’s wedding. As Motel, he wore a talit under his shtetl clothing and close to his heart and a full beard that he sprouted just for the occasion. A more convincing Motel I’ve never seen. If my mother saw Ron’s transformation into the Jewish man she always wanted for Rachel, she would have said, “WHAT KIND OF SYNAGOGUE CASTS A GENTILE IN FIDDLER ON THE ROOF? THEY COULDN’T FIND ANY REAL JEWS?? IT’S A DISGRACE!” And that’s the nicest thing I could have imagined she’d say. Yup, she’s that delightful. She never approved of her children’s partners.

And what of mixed marriages? Where has the tradition of marrying within the faith gotten us, anyway? We’re an inbred, neurotic people plagued by Tay Sachs, hay fever and lactose intolerance. Oh, what?!? Look. I’m Jewish and proud, and I’m raising Jewish kids and my partner is a Jew by choice, and it’s all good. That doesn’t mean that I can’t look at my people objectively and admit that inbreeding is not the healthiest of things-no matter what the breed.

My beautiful, dark haired son with deep set eyes and the beginnings of back hair is more than a little quirky while our Aryan model seems much more easy going in general. Those blue eyes and that light hair may well be proof that something not-so-Jewish infused itself into our family’s blood stream once upon a pogrom. And for as much as it saddens me to imagine that our little Levi might be the result of foul play years ago, it may also be a blessing that his DNA may not be as tortured as his purer brother’s.

“Feh. What do you know about genetics, anyway, Deborah?” I know squat about genetics, it’s true. But a girl can’t help but take a long, hard look at everything that makes her kids who they are. It’s been a tough year at school for Asher, and we anticipate that we’ll be facing some hard truths about who he is and how he operates in the next few months. Until we have some sort of label or diagnosis or test results, however, I choose to torture myself. I rewind his life and evaluate it starting with the genes he inherited to his birth to present day. I examine his diet, environmental pollutants, my parenting strengths and weaknesses and, of course, the tradition of inbreeding amongst my people.

I know the exercise is futile. What’s done is done. And what is done resulted in my perfectly imperfect wonder of wonders. And that was a miracle, too.