Skip to content
During my school days, I was a timid, awkward child beast.  I had a few good friends who prevented me from being completely alone, but I was often teased and more often ignored.  I wasn’t miserable, but it was clear that my lot in life was to spend my days outside of the cool clique fortresses, never to be invited in, not even with a guest pass.
HEY!  Someone cue the violins!!  I’m spilling my guts over here.
Oh, forget it.  That story is tired and overdone, and I’m bored of it for you.  Who cares?
My point in bringing it up is that these days, I suffer from Phantom Loser Syndrome.  It’s like Phantom Fat Syndrome when someone loses a bunch of weight but still feels like an overweight person.  I never feel like the cool kid.
When I tell friends I’ve met in adulthood that I was a pitiful outcast, they shout, “Mentirosa!”  knowing how I crave social situations and how comfortable I am meeting new people.  Bloggers I know have threatened to kick me out of the club for confessing that I am extroverted and happier communicating off-line than on. But even though it’s true that I no longer resemble that shoulder-sloped misfit of my youth, I still consider myself a member of my native outsider class.  I will never be able to shake my uncoolness no matter how fulfilling my social life.
I was thinking about my Phantom Loser Syndrome when I ordered my tea at Starbucks and gave them my Starbucks name, Veronica; a name that had absolutely no meaning for me the day it presented itself from my mouth.  There are many people, I’ve come to learn, that have a Starbucks name.  Some have a Starbucks identity to prevent misspellings and gross mispronunciations of names that the Starbucks baristas mangle, like Francesca or Theodore or Ann.  And some people have Starbucks name just for shits n giggles.  I’ve seen a number of shnorters on the sides of cup.  Batman, Cher, Miss Piggy. 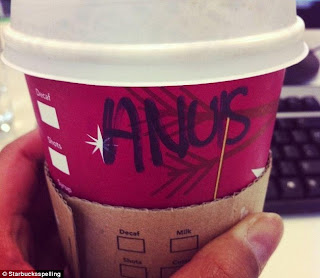 My Starbucks name started out as a source of my own amusement but then, having too much time on my hand one day (because it was only that one day that I had too much time on my hand), I processed. I realized, that Veronica was more than just a name for my Starbucks cup.  She was my cool alter-ego.
Veronica, never Ronnie, was that a cool kid I never was.  Deborah Goldstein, on the other hand, is a woman in her 40s (because who names their kids Deborah anymore?) who is an accountant or a tax lawyer (not that there’s anything wrong with that) with a penchant for sweater sets and scarves.
Veronica, on the other hand, is inherently cool.  No matter what she is wearing or how her hair looks on any given occasion, she looks good.  When Veronica walks down the street, she sets off a series of double-takes that she expects after a lifetime of turning heads.  It’s not that Veronica is drop-dead gorgeous, but she has a certain swagger that says, “Can’t touch this…”  or it could say, “Maybe she’s born with it” or it’s possible that it’s just a cool swagger that doesn’t actually say anything which is probably better.  It’s the Deborah in me who makes swaggers talk.
As long as I’ve got that cup with Veronica’s name on the side, I’m working it.  Veronica is feeling bold and doing her thang (because cool people do thangs and uncool people do things…and really uncool people feel the need to explain the difference to you).
When there is no more tea, and I have to get rid of my cup, I also have to say good-bye to Veronica.  Didn’t we almost have it all, Veronica?
That’s VeroniQa to you, she says.  Shit, she’s cool.
The Veronicas…cause two are cooler than one.