Putting on my coat to get Asher at the bus stop, the phone rang. Caller ID told me it was the BOARD OF EDUCATION. This call usually means Asher is sick or is having a particularly bad day and that I should drop whatever I’m doing which is clearly inconsequential and get him. Well, he probably just sat down on the bus as the phone was ringing, so it seemed a bit peculiar to call at this point to tell me he’s unwell.

Besides, he couldn’t possibly be sick. The boys have caught everything that’s been going around this winter thus far, and he’s just finishing up his 10-day course of antibiotics for the grand finale of an ear infection. I might need to get them tested for gonorrhea tomorrow. That’s about the only thing they haven’t had.

Mrs. J, the school nurse, explained that Asher poured glue all over his head moments before class was dismissed. My first reaction was relief that he was not sick–in the germy sense of the word, anyway. He’s just got a case of Glue-Head. Then, I was confused. We’re talking about a kid who is very particular and neat and does not care for mess. “Asher?” I asked out of disbelief. “Yes, and he’s just been in to see the principal.” The principal?!? He’s got 2 teachers and an aide in his classroom, but that’s clearly not enough to deal with the severity of the glue infraction. Apparently, wearing glue is a CODE RED offense, and only the principal can handle such a crisis situation.

“Is he ok?” I asked the nurse. Asher doesn’t do well with shame, and I didn’t know if the principal simply told him not to do that again or if she chewed him a new one. If the latter, he was probably upset. “Yes, he’s fine. He’s just leaving to get on the bus.” “Ok.” I wasn’t exactly sure what to say next.

“Well, I am simply appalled that Asher would do such a hideous thing!” or “What kind of zoo are you running that not one of the three adults in the classroom was able to stop him?” No, I wasn’t really feeling either of those.

The nurse broke the silence. “He said he was making the other kids laugh.” I confess. I was proud. My Asher is not good with the social stuff. He is awkward with other kids and sometimes even intimidated by them, but there he was finding ways to connect and entertain in spite of himself. Ok, I do think there are less sticky ways of making people laugh, but humor is an art that blossoms after years of experimentation and practice and polish. So, he starts with a little glue when he’s 7. Big deal! “Huh,” is all I can think to say. Now what?

“So, I’ll just go pick him up then. The bus is probably on its way. I’ll be sure to tell him not to pour glue on his head again.” But I couldn’t help laughing while I was saying it. The nurse was not amused. She hung up abruptly. She had done her job. This was the CYA call – Cover Your Ass. She wanted me to know that they knew that Asher had glue in his hair before I picked him up at the bus and had a hissy.

Asher got off the bus, and I gave him an admonishing look with a sprinkle of smirk. His glassy eyes cautioned me to be gentle. He anticipated my wrath. “I’m not angry, Asher. As a matter of fact, I think it’s kind of funny. Is that why you did it? You wanted to make people laugh?”

“No. I didn’t know what else to do. But then when I did it, the other kids did start to laugh and say EW! and stuff.”

“Ok, well next time you don’t know what to do, I want you to please tell your teachers before you do something that might be disruptive or inappropriate. What did the principal say?”

“She told me that I couldn’t put glue in my hair.”

“Ok, so now you have to promise me that you won’t put glue in your hair again.”

“Thank you. Let’s go home and wash your hair.”

I think it’s time to start teaching him some jokes. 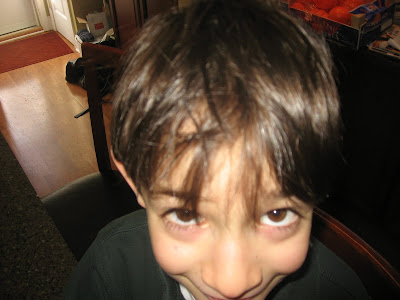 Two cannibals were eating a clown. One cannibal said to the other, “Hey! Does your food taste funny?” Thanks for that one, Uncle Benjamin.